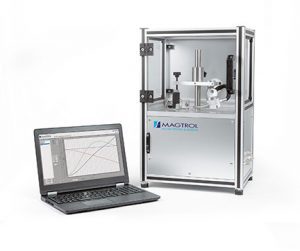 MSD Mega Speed Dynamometer is the latest Magtrol innovation in the very high-speed motor and system testing. Challenged by its numerous customers in the Dental and Surgical field, Magtrol is pushing the limit to a level which was never reached.

The braking effect is based on Eddy-Current induced on an aluminum disc directly mounted on the DUT (Device Under Test) shaft. Torque is measured frictionless by a 20 mN·m Reaction Torque Sensor having a resolution of 0.01 mN·m. Due to the thermal effect on the disc, the Mega Speed Dynamometer is not suit­able for endurance testing, but can be used to generate a fast curve or perform point to point testing. An infrared sensor monitors the temperature of the disc and stops the test in case of overheating. The disc can be designed and sized according to the motor parameters. The system is contactless therefore alignment is not critical and the inertia is very low (no friction, no residual or drag torque). The speed limitation is given by the Motor Under Test and its ability to drive the disc.

MSD-TEST Software controls the system and captures the test data. It allows the programming set up of dedicated test profiles. The software integrates a calibration routine, allowing the control and periodical calibration of the MSD Mega Speed Dynamometer.

Air pressure sensor(s) can be provided as an option. The system offers 2 analog outputs as well as 6 analog inputs which can be configured for speed, torque, pressure or other parameters.

To date, several systems have been delivered for testing Dental Handpieces, Surgical Atherectomy Turbines or BLDC Motors for Automotive applications.

We use cookies to make some areas of the site work and for statistical data. By continuing you consent to our use of cookies.ContinueLeave

Accept All Only Necessary